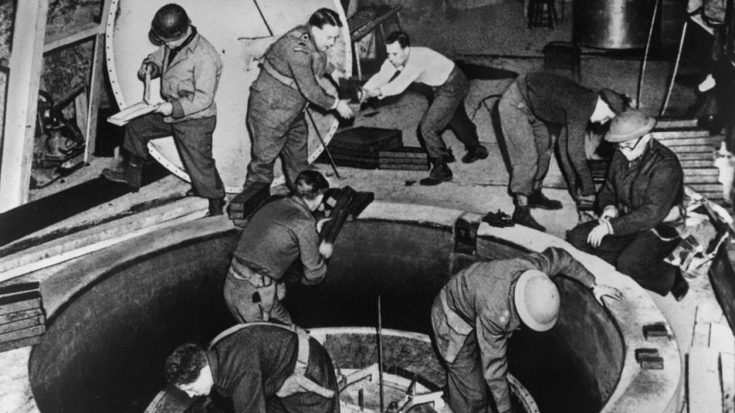 The use of the atomic bombs against the Japanese forced a surrender and put an end World War II. The use of such destructive weapons has been the subject of much debate over the years, but their use was necessary to put a stop to the ongoing carnage of the war. Nuclear weapons may be controversial, but things could much worse if the Nazis completed their own atomic weapon program.

Six months before Europe entered WWII, German scientists were experimenting with nuclear fission. It didn’t take long before they began to think of ways to weaponize the project and began work on a nuclear bomb. Leading the charge on their nuclear program was physicist Werner Heisenberg who was considered on the same level as Albert Einstein when it came to research. The elite group of researchers was known as the Uranium Club heavily invested in a research facility located in central Germany.

“This team’s goal was to determine whether nuclear weapons would be relevant in the near future to warrant the considerable expenditure required to develop the technology. In 1940, C. F. von Weizsacker proposed using neptunium, element 93, as a nuclear explosive, but once it was realized that the element was unstable, plutonium, element 94 and neptunium’s decay product, was proposed as an alternative.”

Ultimately the project stalled as Germany found many of its top engineers and physicists incarcerated or fleeing the country, amounting to nearly 2,000 of their key academics. German physicists also endured a military complex that cared little about their research and was focused towards troops and aviation. Many historians believe the nuclear research program was put on the backburner due to the Aryan Superiority complex of Germany, thinking itself invincible. Later war efforts was focused on V-2 Rockets and experimental aircraft which met with little success.

At the end of the war, the project had progressed in the way of research but not the way of a finished weapon. Werner Heisenberg was in complete disbelief when he heard the news that American Forces had used an atomic bomb on Hiroshima. American researchers had the support of their government and scientists who were always hard at work to achieve a successful nuclear program. This short film shows a tour through the Uranium Club’s research facility and what could have meant a turning point in WWII.