This Just Keeps On Getting Better. This Rare FW 190 Is Joined By A BF 109, Mustang AND Jug 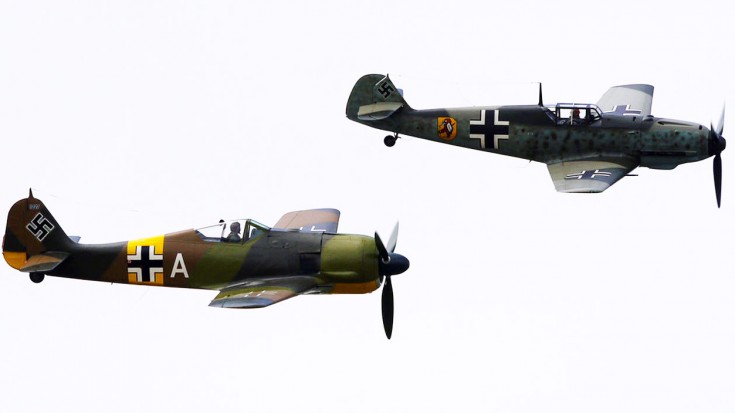 By the second half of 1937, the Luftwaffe needed to add a better plane to their fighting force in order to make sure of their air supremacy for years to come. They had to wait until June 1939 for the Focke-Wulf FW 190, a fighter that seemed better than the Bf 109 in everything but high altitude performance. While the FW 190 ended up being marginally better than the Bf 109, it certainly outclassed the earlier Spitfires of the time, up until Spitfire Mk. IX. Powered by a BMW 801 radial engine, the FW 190 ruled the skies at low and mid altitude, dispatching enemy aircraft with relative ease for almost 12 months.

The A-8 had two MG 131 machine guns and four MG 151/20 E cannons, while the D-9 could also carry a bomb weighing no more that a thousand pounds.

As years passed, the Focke-Wulf FW 190 went through many transformations, both in features and purpose, with over twenty thousand of them leaving the factory floor during World War 2. While it managed to dispatch countless enemy aircraft, its greatest effect lies in forcing an answer from the Allied Forces, which lead to further technological improvements and breakthroughs which you’ll be able to see in this video. They were the Thunderbolt and Mustang!