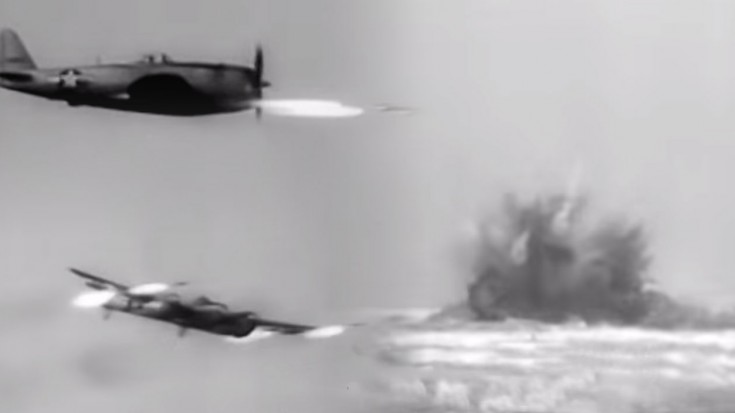 This Newsreel Introduced The Public To A New Weapon

HVAR, or High Velocity Aircraft Rocket was often called Holy Moses. Produced from 1944 to 1955, this unguided rocket was developed towards the end of World War II and was used extensively all the way up to the Korean War. Its primary purpose was to destroy targets on the ground while being shot out of an aircraft, such as the Lighting and Thunderbolt as you’ll see in this awesome clip.

The HVAR was an improved version of the earlier FFAR rocket, which was a 5-inch Forward Firing Aircraft Rocket that was slower and less accurate.

The final testing of these rockets was completed right before D-Day. They were immediately mounted on Thunderbolts and Lightnings to support the heavy fighting in Normandy. Able to penetrate 4 feet of reinforced concrete, these rockets were used to severely cripple anything from Nazi transports to tanks. In terms of operations, they were very effective when fired from an aircraft with an experienced pilot. Since they were unguided, you had to make the first deployment count as you only had so many rockets you can carry. If you missed, you’d have to come in for another approach, exposing yourself again to enemy fire.