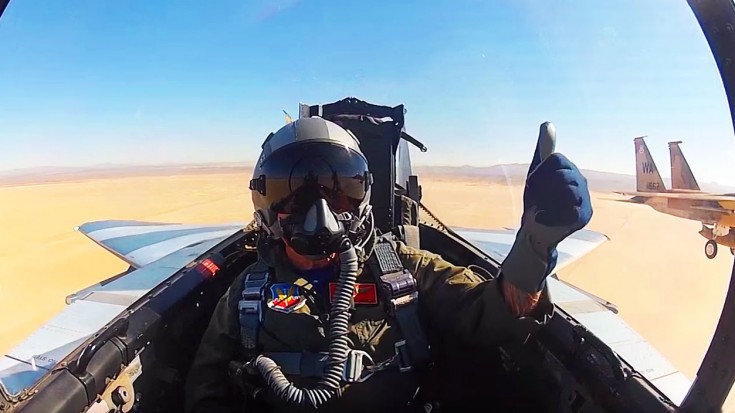 Talk About A Special Kind Of Day.

Men like this are one in a million. So are such days as you’ll see in this footage. In order to commemorate the day when the speed of sound was broken, the Nellis Air Force Base organized something truly unique. They invited the man himself, Chuck Yeager, to get onboard an F-15 Eagle and break the sound barrier again just like he did for the first time on October 14th, 1947. They did so on the same day in 2013 and while in flight, hit Mach 1 at exactly 10:24 a.m, just as he did 67 years beforehand.

To name all of Yeager’s accomplishments would take a book, probably divided into volumes, so we’ll just stick to the basics. Yeager was an aviator, not a pilot. He became ‘ace in a day’ during World War II and racket up over 11 kills total, one of which was an Me 262. Pertaining more to the video, he was known as ‘the fastest man of the planet’ when he flew Bell’s X-1 aircraft and hit Mach 1.07 at 45,000 ft. To speak to his overall character, consider this. Two days before this historic flight, Yeager fell off a horse and broke two ribs. Not wanting to have the experiment cancelled or to be replaced, he drove two towns over to a veterinarian to patch him up, only telling his wife and one close friend. On the day of the flight, he had the said friend install a special lever to help him lover the canopy, as he was in too much pain to close it himself. Minutes after, he made history.