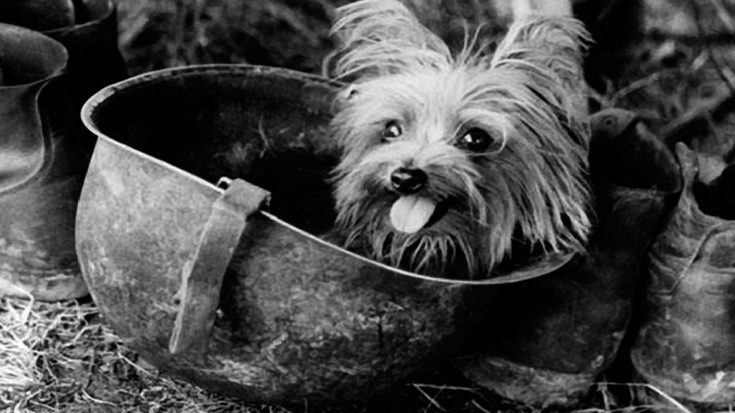 There are many champions of the second World War that come to mind. People such as General MacArthur, Winston Churchill, Audie Murphy, and Dwight D. Eisenhower are often among the most iconic heroes of WWII. But there is another hero who had a profound impact, a tiny Yorkshire Terrier named Smokey.

In February 1944 Corporal Bill Wynne purchased Smokey while serving the Pacific Theater of War, little did he know how life changing this dog would be. For the remainder of the war, Smokey would accompany Corporal Wynne on some life-threatening challenges. Her cheerful drastically improved the mood of the soldiers who felt on threatened from possible attacks from the Japanese.

Smokey joined Corporal Wynne for a dozen combat missions, survived multiple typhoons and roughly 150 air raids. She even ran away from their base causing Bill to chase after her, which was immediately bombed by the Japanese and the two narrowly escaped with their lives. When their base needed to construct a telephone line through a small underground tunnel, Smokey saved the crews days of time by running the wires attached to her collar.

“The pipe was just eight inches in diameter, and the only way to put the lines in place would be to do the job by hand—having dozens of men dig a trench to get the wires underground, a dangerous job that would’ve taken days and left the men exposed to the constant enemy attacks. The little dog reached the other side, the communication network was established, and she was credited with saving the lives of some 250 men and 40 planes that day.”

After her time in WWII Smokey went on to have an even more significant role, she became the world’s first therapy dog. Smokey spent time visiting wounded soldiers and victims of Post-Traumatic Stree Disorder to help ease their suffering. She paved the way for modern-day therapy dogs used by veterans.

Smokey became a national sensation, performing tricks on TV, helping veterans and the popularity of the Yorkshire terrier is often attributed to her. She passed away in 1957 at the ripe old age of 14 leaving a legacy of heroism both on and off the battlefield. Bill Wynne comments on his war experiences with Smokey in this clip.