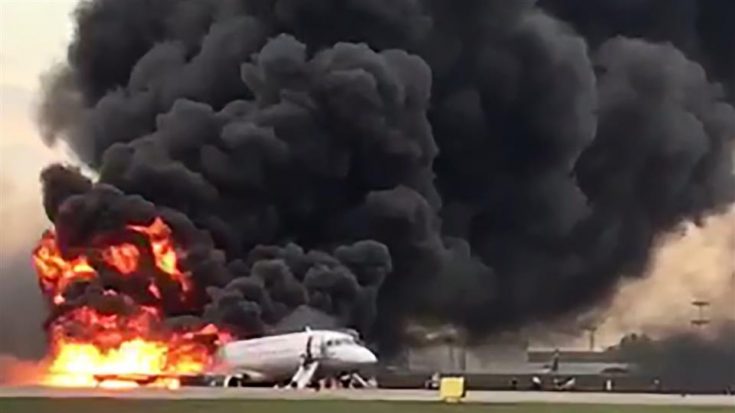 On May 5, a Russian passenger plane’s emergency landing had turned awry, eventually culminating into a fiery crash landing that killed more than 40 people on board. It was Russia’s deadliest aircraft incident in almost a decade.

Flight SU1492 was on its way to Murmansk when its pilots decided to turn it back for an emergency landing at Sheremetyevo airport in Moscow.

At this time, authorities had pinned the cause of the disaster mainly to pilot error and adverse weather function. Lighting was reported to have struck the plane just before takeoff.

The pilot Denis Yevdokimov reported a “bright flash and a clap” as lightning struck the plane’s tail. The destroyed aircraft was part of the fleet of Sukhoi, Russia’s biggest passenger jet.

Aeroflot – Russia’s national carrier – operates 50 Sukhoi Jets, a number that will increase to 150 by the year 2026.

On the other hand, crew members stated that the plane had earlier been hard-hit by hale while flying through the clouds before it was struck by lightning. Of the 78 people aboard, majority of those killed were, unsurprisingly, seated at the plane’s tail section.

"Witnesses insist that people in the back of the cabin were stuck in their seats because passengers further forward grabbed their hand luggage before exiting. Footage shows passengers emerging carrying bags and coats."
https://t.co/XeXVuZuUxo

Rescue efforts initially reported that only one was killed. As the efforts went on, however, the authorities were constantly met by a grim sight of bodies buried under the fiery wreckage.

In 2016, a fleet of Sukhoi jets was grounded because of technical malfunctions and non-compliance with a number of aviation safety protocols. Moreover, in 2012 another one of its jets crashed into a mountain in Indonesia and killed 37 people.