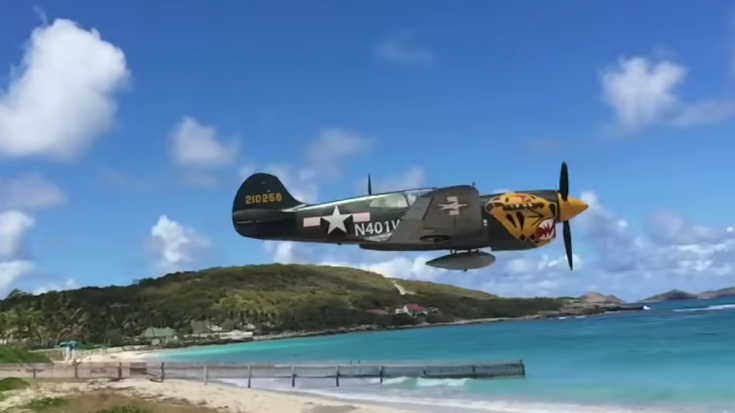 Two Years In The Making.

We’ve shared a lot of videos with you folks over the years. Some were entertaining, while others educational. One thing’s for sure, flyby videos are unbeatable.

They’re fast, sound absolutely fantastic and give you that chill than nothing else really can (if you’ve ever been given a proper prop job, you know what we’re talking about.) To make this article as good as possible and remind you how great these videos are, we’ve compiled a list of 6 flybys that statistically did the best on our website.

The order is as follows if you’d like to know what’s ahead of you. A super low B-17, a Corsair buzzing a crowd, a Jug pilot getting low, then a Mustang followed by a series of planes and finally, Ray Hanna in a Spitfire! These flybys are without a doubt the best ones on the web when it comes to World War II warbirds. Let  us know if you agree with our list.

This awesome footage comes from the 1962 movie War Lover. During this scene, the pilot was reprimanded for a wrongdoing, but wasn’t having it. In an effort to get back at his CO, he buzzed all the buildings around the airfield.

The person who piloted this B-17 sure knew what he was doing, as in certain parts he was no more than 10 feet off the ground. In other shots the wings nearly scrape the roofs of buildings. In our opinion, this is the best B-17 clip ever.

Raymond F. Thompson of Montana is one fortunate guy. Making quite a bit of money in his lifetime, he made one of his dreams come true. He bough an F4U Corsair. Equipped with his own airfield, he got some people together and gave them a buzz of a lifetime. He also owns a couple other vintage including a P-51 Mustang. There are plenty of videos of him flying and they’re all spectacular. This one however, probably takes the cake as he flies right on top of people.

When we posted this before, some people were outraged and threatened to call the FAA (a pretty empty claim.) In our opinion, if you have your own plane and your own land, do as you wish. Isn’t it what this country is all about?

4) Throaty Thunderbolt Getting Nice An Low

Now this one is going to make your ears really happy. Although this warbird didn’t get as low as the others in these videos, the sound of that radial is incomparable. Just listen to it. This pilot dips down right in front of spectators and makes a nice, low yet slow pass so you can listen to her for as long as you can.

Equipped with the powerful Pratt & Whitney R-2800 Double Wasp engine, the sound of it is unmistakable. It was so reliable and powerful in fact, that it was equipped on my World War II warbirds including Hellcats and Corsairs.

3) One Of The Horsemen Hugs The Ground–Twice

The Horsemen are a very talented team of aerobatic pilots. Although they fly the P-51 Mustang as their name would suggest, their arsenal of planes is quite more extensive and amazing. They also fly T-6 Texans, F-86 Sabres and F8F Bearcats.

Here, Ed Shipley, their lead, guys the ground in one amazing Mustang flyby. He dips down nice and low for this shot and isn’t stingy on the throttle either.

Although one of our favorite videos, we had a hard time picking “the best” P-51 Mustang flyby. We found and wrote about almost 20 of such videos, and they’re all great. There’s one incredible one that screams extremely loud but it’s a dive, not necessarily a flyby. Maybe we’ll do a “Top 5 Mustang Scream” videos. What do you think?

2) No FAA Regulations On This Island

Although rules set by the FAA are there to protect the spectators, pilots and planes, you’ll see some crazy and possibly best flying in a part of the world that doesn’t have them. St. Barths is one of them.

During one spectacular airshow a Corsair, Mitchell, Warhawk, Tigercat and Zero were invited to make some of the most eye opening warbird passes you’ll ever see. And we mean it when we say that.

Not only is the scenery absolutely gorgeous with it’s clear skies, rolling hills and crystal clear waters, the warbirds are even prettier. The way that the runway is set up is pretty, but pretty sketchy too. The planes have to approach from the water side and over a giant hill, then immediately dip down because the runway starts right at the bottom of it.

Although it doesn’t look that safe, these pilots give the best shots to photographers and videographers. It’s the perfect spot to stand, although those flybys on the airfield are awesome too. Check out the video and decide for yourself.

1) And Finally, A Spitfire Freaks Out A Reporter

This is one of the oldest clips we’ve seen, but is by far our favorite. Ray Hanna is a legend among pilots. Flying for The RAF, his skills helped him be the founding member of the Red Arrows. For those of you who don’t know who they are, they’re RAF’s aerobatic team. Think of the Thunderbirds or the Blue Angels, only in England.

As he had a gift for flying, being featured in videos such as these are not uncommon for him. Here, he was supposed to buzz a reporter as per agreement, but gave him more than he bargained for.

The reporter stood there in front of the camera saying his piece (possibly live?) and the Spit was supposed to come from behind him for an extravagant shot. What happened however…well, you’d just have to see it for yourself if you haven’t already.