At 93, Vet Gets Purple Heart But You Won’t BELIEVE Why It Took So Long 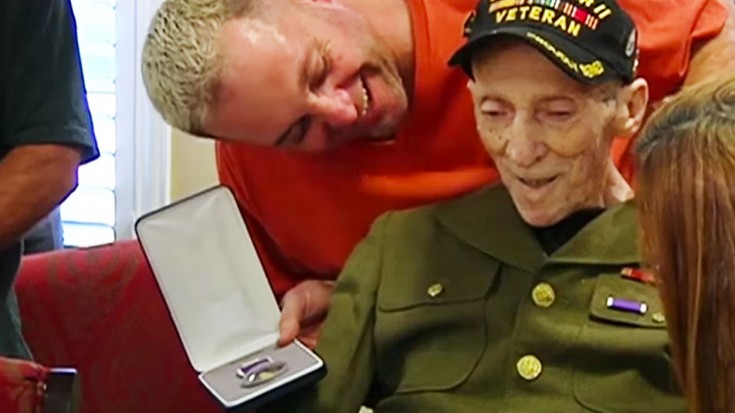 In October of 2015, a 93 year old World War II finally received a purple heart for suffering through two life threatening injuries during his service. A humble man, he never spoke about his experiences during the war and never mentioned the sacrifices he made during combat.

That all changed when his daughter looked into his footlocker which housed a letter from almost 70 years ago.

Leo Silverstein was a .50 caliber gunman who initially fought in Africa and was nearly killed when shrapnel struck his head during combat. Able to recover, this brave young soldier wanted to rejoin his unit which by then was moved to Sicily. He got his wish but within two months was injured again which put him out of the war.

It was a doctor’s note that made people aware of Silverstein’s accomplishments.

His brave and heroic acts were never acknowledged possibly due to a fire that destroyed many World War II records that were housed in St. Louis. This 1973 incident caused millions of soldiers’ files to be burned, Leo Silverstein’s being one of them. With no record of his service, his undertakings went unnoticed until now.

Leo’s daughter found a doctor’s note in her dad’s footlocker in his bedroom describing his injuries and his return to service. Not knowing any of this as her father never spoke of the war, she passed it along for her dad’s story to be heard. It was finally picked up by Arizona Congresswoman Martha McSally who then awarded him with a Purple Heart for his bravery and service.