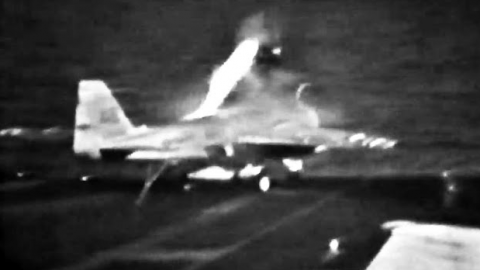 On February 1991, the Grumman A‑6E Intruder Bureau Number 155602 lost its braking power after landing on the USS America. Just seconds later, pilot Lt. Commander J. “Mac” Williams and bombardier/navigator Lt. L. Fox both ejected before the aircraft nosed over the deck. Williams was reportedly hurt and broke his leg during landing.

And as for the A-6E Intruder, it did not completely go over so the deck crew were tasked to push it over the side so they could clear the deck.

A little bit about the Grumman A-6 Intruder. Introduced in 1963, it participated in the Vietnam War and the Gulf War.