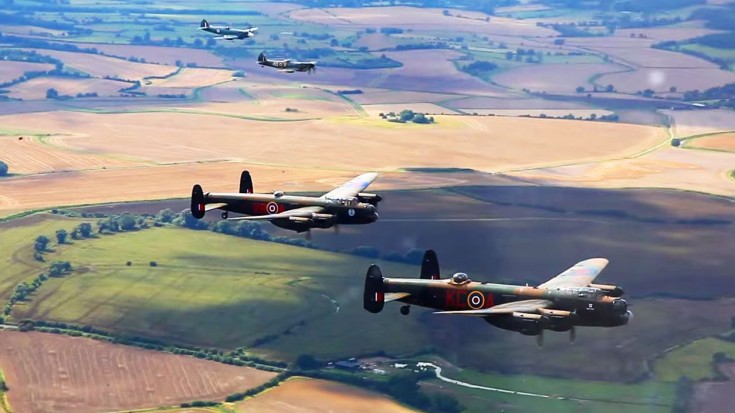 Just In Case You Need Some Merlin Today, Here Are 10

The Avro Lancaster was one of Britain’s best heavy bombers. Fitted with four powerful Rolls-Royce Merlin engines, it was a force to be reckoned with. Lanc as it came to be known, became quite an effective night bomber, dropping 608,612 tons of bombs on enemy targets. Because its specially designed bomb bay was long and unobstructed, it allowed the Lancs to be loaded with some of the biggest bombs. Some of these included the 12,000 pound blockbusters, which as their name suggests, could level entire street blocks.

There are only two airworthy Lancasters surviving in the world today, while another 15 are on display in various museums

If Lancaster’s had a best friend, it would be the accompanying Spitfires you see in the video. Britain’s top fighters, they often escorted the Lancasters on bombing missions in case of an intercepting attack. Fast and maneuverable, they took on most of the fights reserved for the Hawker Hurricanes against the Luftwaffe. Beyond dogfighting, Spits as they were called, were also used as fighter-bombers, photo-reconnaissance aircraft and interceptors.