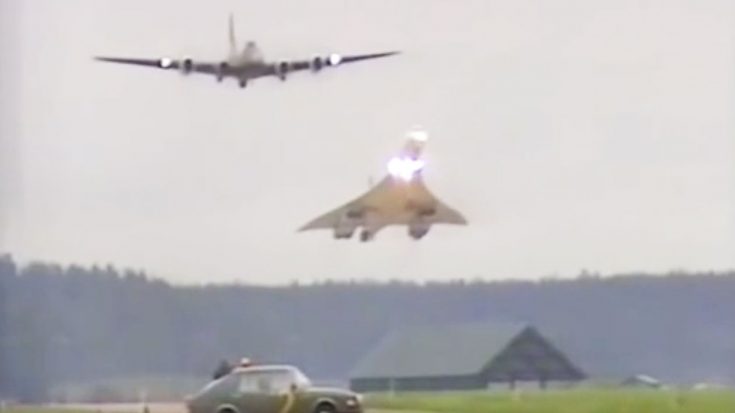 It is just us or were airshows back in the day way better? Not that there’s anything wrong with airshows today, but in the 70s and 80s planes got lower, flew faster and just the overall displays seem way more badass without a lack of a better word.

Now that we got the nostalgia out of the way, let’s take a look at this clip. We’ve got the world famous B-17 named Sally B flying next to a Concorde. A fricking Concorde guys and gals. Who can say they’ve ever seen that combination before?

Concordes could reach speeds up to Mach 2.04 or about 1,354 mph at cruise altitude.

We’ll tell you who actually. The people attending an airshow at the Hässlö/Västerås airfield in Sweden back in September of 1987. It’s a small airport which handles had a bit over 15,000 landings a year, but apparently, they’re a great host for airshows. Or were, because we weren’t able to find many more videos from that venue since.

All in all, this isn’t the most exciting video we’ve ever posted, but it is neat. Seeing the only supersonic commercial plane ever made which is no longer in service fly with a historic warbird is definitely noteworthy.