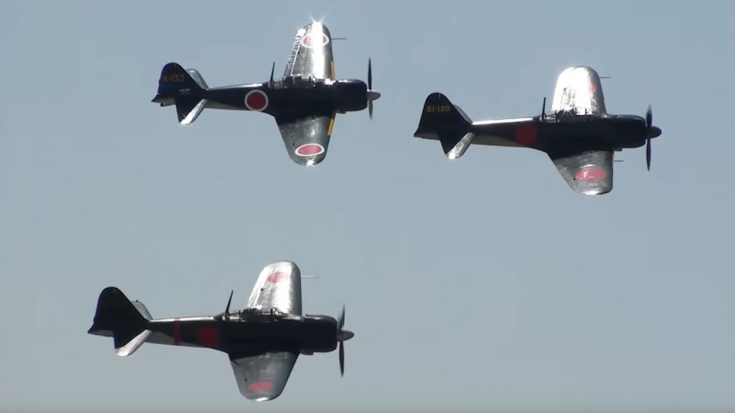 The A6M Zero was the pride and joy of the Japanese Military during the early years of World War II. Painstakingly designed by Jiro Horikoshi of Mitsubishi Heavy Industries the A6M Zero became the most feared fighter over the Pacific. The greatest strengths of Zero were its speed and agility making it capable of aerial maneuvers other fighters were not capable of pulling off.

For a time other fighters couldn’t match the capabilities of the A6M Zero, but it wasn’t long until they did. Allied Fighters such as the P-51 Mustang proved to be superior in later years of the Pacific war. Japan was fighting a losing ground against the Americans and the A6M Zero just wasn’t cutting it as a fighter. Near the end of the war, many Zeros were packed with explosives and used as suicide bombers against Americans.

Due to their use as kamikaze bombers, few A6M Zeros survived World War II and most are unable to fly. Planes of Fame held an Air Show that brought together a sight rarely seen, not just one but three Zeros. It’s a once in a lifetime chance to see a Zero, but now three are together in this clip.