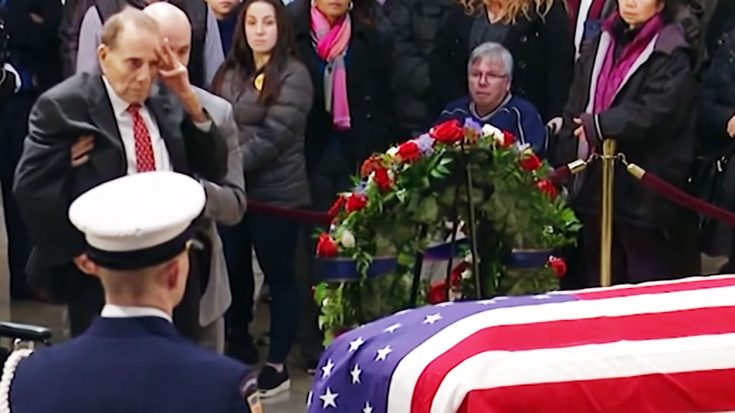 Our 41st president, George H. W. Bush, passed away on November 30th, 2018. He was 94 years old. His passing came only seven months after his wife of 73 years, Barbara Bush, also passed away.

The country will now be flying their flags at half mast for the next 30 days, a symbol of mourning for the United States.

As one can imagine, the funeral brought together many dignitaries, both old and new. The attendees included:

Although the entire ceremony was quite poignant, perhaps one of the most heartwarming/emotional moments came when former Senator Bob Dole came in to pay his respects. Now wheelchair bound, Dole was pushed in front of the casket but refused to stay seated.

One of his aids helped him stand up straight so that he can properly salute his political friend but more importantly his brother-in-arms.  Both Bush and Dole served in World War II; Bush as a naval aviator and Dole in the Army and both suffered during it. Bush got shot down in the Pacific and Dole was shot by the Germans in Italy.

The news footage below will show you the event as it unfolded. Fair winds and following seas to you, George H. W. Bush. May you rest in peace.