Check Out This Crusader That Just Became Available For Purchase 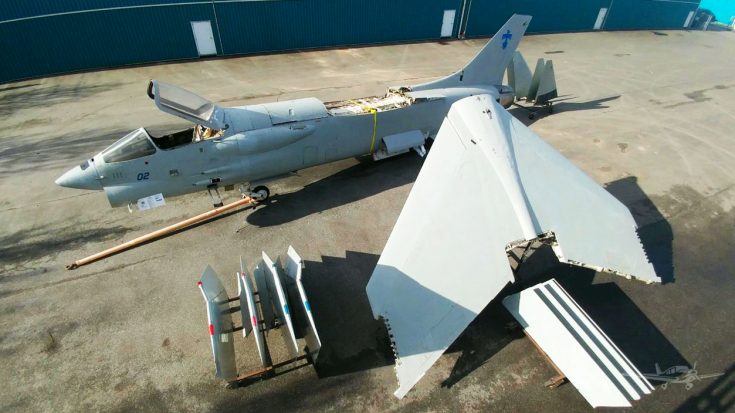 Exterior photo of all the parts of the Crusader for sale. | Photo Credit: www.controller.com

The Vought F-8 Crusader was a air superiority aircraft introduced to the Navy and Marine Corps in 1955. A carrier based aircraft, it was primarily used during the Vietnam War and later served as a photo reconnaissance aircraft until it was retired in 1999.

Over the years, over 1,200 of them were built and earned the title of “The Last of the Gunfighters” as they had 4 20mm cannons as their main weapons. They also had hardpoints for missiles and bombs.

The aircraft for sale is located in Arlington, WA and is owned by Mark Clark. You can see the full listing here with more photographs and details.

According to the description, the aircraft is disassembled (as you can see in the pictures) but all the parts are there including the engine. The flight logs are also included giving this future build a nice long history to fill in the blanks and make it more legitimate.

As of now, 2018, there are no airworthy Crusaders in the world. The perfect buyer would be either a wealthy individual who could put up the money to restore this plane or a museum with some funding for either a static display or also for a complete restoration.

One thing’s for sure. A lot of work will have to be put into this project to make it presentable.