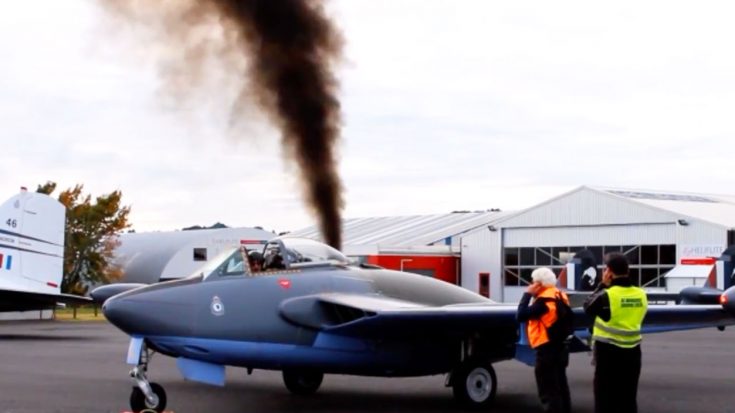 The deHavilland DH 112 Venom was the brainchild of the British right after World War II. The jet age was in full throttle during that time and in 1948 the Royal Air Force was looking for a fast and maneuverable fighter-bomber. Only a year later, the first Venom took to the skies on September 2nd, 1949 and with favorable results. Sadly, it only served for a limited time as aviation technology was growing exponentially.

The design had a quite spectacular performance for the period. With a service ceiling of almost 40,000 ft., range of 1,000 miles and a top speed of 640 mph, it could hold its own and be adapted to many different roles. The engine, too, was quite a feat of engineering as well.

Fitted with a Ghost engine, also produced by de Havilland,  it was started just like some World War II piston engines. An explosive cartridge had to be placed into the engine to kickstart it, a method similar to how one might start an F4F Wildcat for example. Called the Coffman engine starter, this method was widely used in both aircraft and armored military vehicles before and during World War II. Its explosiveness was used to kickstart the pistons in traditional engines and push the turbine to start jet engines.

You can see how it looks and sounds in the video below.