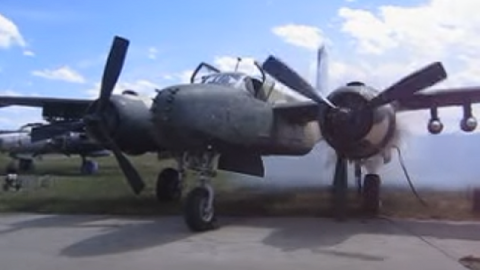 The sound of this Douglas A-26 starting up is both amazing and terrifying at the same time, and its dark monotone color fully supports that statement.

Douglas Invaders were used during the Second World War and the Korean War. It took a while for it to be fully accepted by the Air Force in the Pacific Theater. It wasn’t until the glass-nosed version that the Air Force thoroughly used the A-26. In Europe, it flew 11,567 missions and dropped 18,054 tons of bombs.

This video was shot back in 2004 yet it’s still surprisingly airworthy as of this year. It flew from Colorado to Fort Worth, Texas just a month ago! Judging by its 3-hour flight, it looks like its Pratt & Whitney R-2800 engine is still performing as intended.