F-16 and Rare Warbirds in Formation 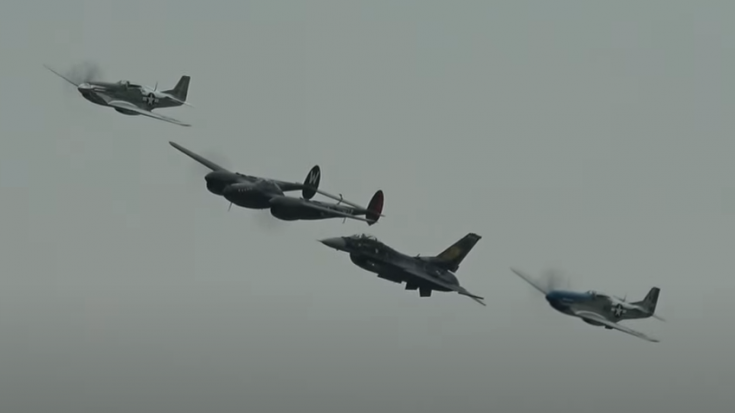 In a recent uploaded video of YouTube channel AirshowStuffVideos, it shows how the US Air Force F-16 Viper demo team performs a USAF Heritage Flight routine in formation with a rare P-38 Lightning and two P-51 Mustangs held at EAA AirVenture 2021 in Oshkosh, Wisconsin.

The F-16 Fighting Falcon is one of the world’s most successful and combat-proven military aircraft to ever fly proving itself to be a capable 4th generation multi-role fighter. It is powered by a single Pratt & Whitney engine and originally developed by General Dynamics for the United States Air Force.

F-16s are designed as an air superiority day fighter, but eventually evolved into a successful all-weather multi-role aircraft. It has collectively taken part in more than 400,000 combat sorties in operation with militaries worldwide and have logged a combined 19 million flight hours.

The F-16 still didn’t have an official name in 1980, until pilots and crews had dubbed the jet the “Viper” due to a perceived resemblance to a viper snake as well as the Colonial Viper Starfighter in the TV series “Battlestar Galactica” which aired at the time the aircraft entered service.

Some of the comments read:

“Wow amazing stunts and flybys! Those pilots did a magnificent job!”

“LOVED seeing this in person… if anybody has never been to Oshkosh for EAA Airventure, GO!!! You won’t be disappointed at all !!!”

Watch the F-16 in formation with other rare Warbirds below.