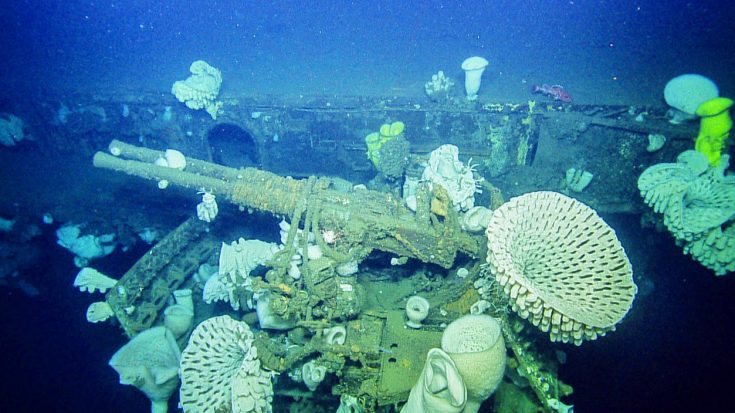 The USS Independence has seen better days, but this is the first time that anyone has seen her in 65 years. Once upon a time, the USS Independence was one of the proudest vessels of the US Navy. Now she sits alone at the bottom of the sea, after being sunk by a nuclear bomb 65 years ago.

The massive aircraft carrier fought well during WWII, engaging in conflicts in the Philippines and the Battle of Okinawa. During these fierce battles against the Japanese, the USS Independence had sustained too much damage and was considered unfit for further service.

After being retired from combat, the Independence was placed among a group of large naval vessels in a nuclear weapons testing project at the Bikini Atoll. Miraculously the USS Independence was not sunk by the massive nuclear blasts half a mile away. The legendary aircraft carrier met its final fate when it was taken to off the coast of San Francisco and sunk after two torpedos were fired upon its hull.

Now the National Oceanic and Atmospheric Association have begun a dive into the remains of the USS Independence. They are using robotic submarines to explore the wreckage and to study the effects that six decades of radiation has had on the hull. For the first time in 65 years, you can see the final resting place of the USS Independence and the effects of radioactive contamination on this artificial reef in this clip.