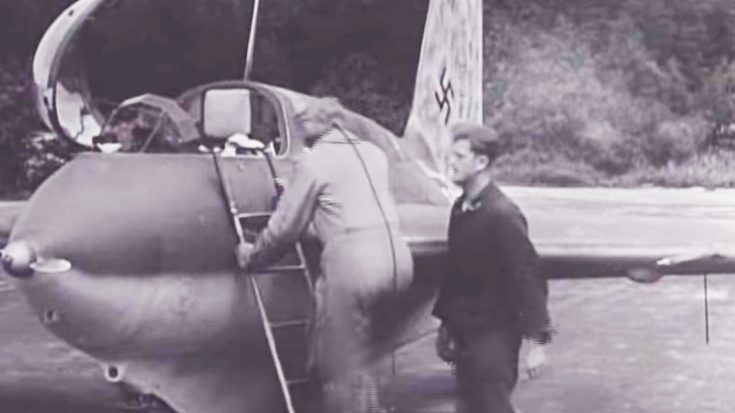 Messerschmitt’s Me 163 Komet was quite a plane. It was the only operational rocket-powered aircraft. It was the first to hit over 620 mph and “unofficially” hit 700. It was also incredibly dangerous to fly.

Its fuel consisted of methanol alcohol and hydrogen peroxide. When they came in contact, a violent reaction ensued and many test pilots and fighter pilots exploded in midair. Also, their landing gear fell off on take off so landing one of these tiny things was hazardous every time you flew it.

In view of the nature of the fuel, Hanna Reitsch like all Komet pilots had special protective clothing, but despite the protection, some pilots were dissolved alive by the murderous fuel.-Documentary Narrator

In this video, you’ll get to see footage that is very rare. Not only is it of the test flights of this rocket-powered aircraft, but a woman, Hanna Reitsch, talking about being one of the test pilots.

Reitsch was born in what is now Jelenia Gora in Poland in 1912. Interested in flying at a very early age, she became a glider pilot and instructor as well as a stunt pilot. Once World War II began, she was was a test pilot for the Luftwaffe. From the first helicopter to the Stuka and Komet, she was the only woman to test these machines.

Watch the video and the interview of her flying the Komet. It’s really interesting.