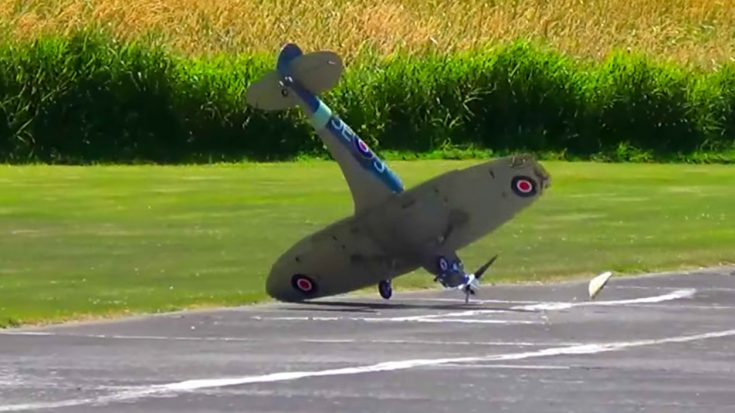 There is nothing quite like the Supermarine Spitfire, the legendary champion of the Battle of Britain. Often called the backbone of the Royal Air Force this powerful fighter made short work of Luftwaffe planes thanks to great maneuverability from its elliptical wings. A great aircraft that was arguably the best fighter of World War II so it’s no wonder it gets the RC model treatment.

“Structurally, the Spitfire was a straightforward design with a light alloy monocoque fuselage and a single spar wing, with stressed-skin covering and fabric-covered control surfaces. The elliptical wing was very thin compared to the standard at the time and was adapted from Mitchell’s aesthetically pleasing 1925 S.4 design.”

This RC Spitfire flies like a dream, but even the best of dreams can suddenly turn into nightmares. This Spitfire was strutting its stuff in the skies at Warbirds Over Whatcom, impressing the crowds left and right. Not all goes as planned when it came down for some low maneuvers. The pilot tries to salvage the situation but as you can see in this clip there is only so much you can do.