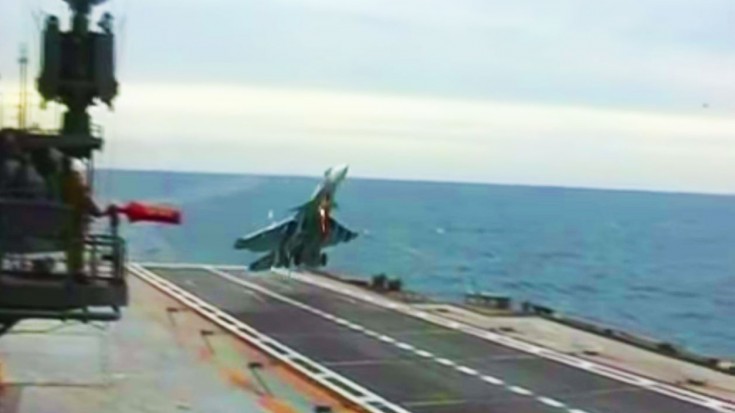 Despite Everything, The Pilot Made A Nice Save.

Being a jet pilot is awesome, but it’s a well-known fact that navy aviators are a special breed of crazy. Landing a couple million dollar jet on a carrier ten stories tall is no small feat. While you’re battling wind on approach, you have to control everything from your speed to the angle you’re coming in at. As you’re doing that, the deck of the carrier is rocking front and back and side to side with the waves.

All said and done, as a navy pilot, you have no choice but to land on the deck no matter what as you have no other alternative. In this video, the pilot had a bit of trouble with that!

The Sukhoi Su-33 is a variant of the Su-27 and is used by the Russian Navy.

The Sukhoi Su-33s are all-weather twin-engine fighters specifically designed for naval operations. Based off of the Su-27, there were a total of about 24 Su-33s produced. To make them more navy friendly, they were fixed with folding wings, a strengthened structure and were also rigged to be air refuelable.

The Russian Navy still operates these planes, although they are looking to purchase newer equipment as these aircraft are quite outdated.