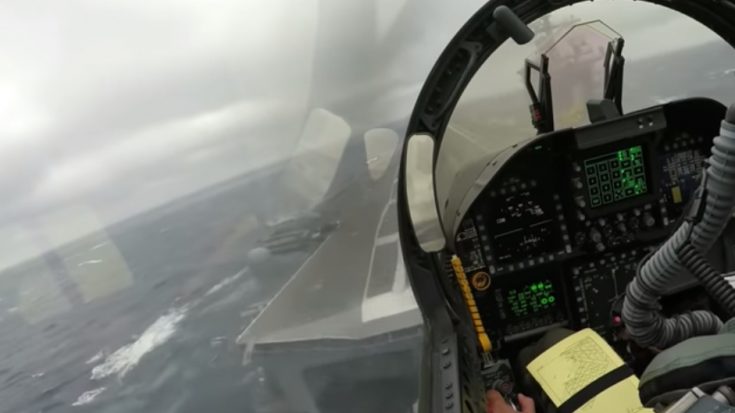 Landing a Super Hornet on an aircraft carrier is pretty much always impressive. It’s one of the most challenging exercises in aviation. But when you add bad weather and a view just over the pilot’s shoulder, you get to see for yourself how skilled these pilots actually are.

The Super Hornet can reach speeds up to 1,190 mph, which is way faster than most people can even imagine. There’s no room for error at any time and it takes an extraordinary amount of focus.

In this nearly 5 minute long video, the pilot first passes the carrier at 45 seconds through a cloudy sky and choppy waves below. Taking it all in, he glances around with calm calculation. In complete control of his instruments, he isn’t bothered at all.  But you just know that that the carrier isn’t going to be feeling so steady.

And, before you know it, he’s already landed. The carrier materializes from the fog directly in line with the Super Hornet. The pilot bounces in his seat, ending the ride with an abrupt, but relatively smooth, complete stop. All he has left to do is park it. What a powerful plane and wow, what a job!

See all the action in the video below.