Intense Dogfight Between US Pilot and Iraqi MiG 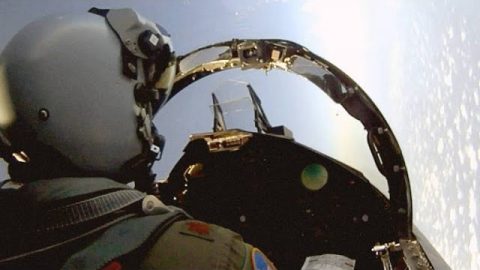 The video features one of the most intense dogfights between a US pilot and an Iraqi MiG. It was January 1991, Operation Desert Storm. Colonel Cesar Rodriguez, a USAF pilot, knew he was in trouble. He was trying his best to avoid being shot down by an Iraqi MiG-29.

With the enemy plane is just seconds away from blowing him out of the sky, Rodriguez made a split-second decision- confuse the MiG’s radar to look down into the ground. Now, the radar has to recalculate to deliver the weapon.

His wingman then locks the lead MiG, and takes up a shot with his AIM-7, taking one MiG down. However, there was another MiG-29 just 10 miles away. Instead of turning away, Rodriguez and his wingman chose to fight the incoming MiG. The MiG-29 flies down the desert floor, trying to outmaneuver the F-15’s radar, a costly decision.

Rodriguez then watched the enemy plane take a hard turn back up, but too late to escape the momentum down. The enemy’s plane afterburners were cooking and eventually translated into a fireball into the ground.