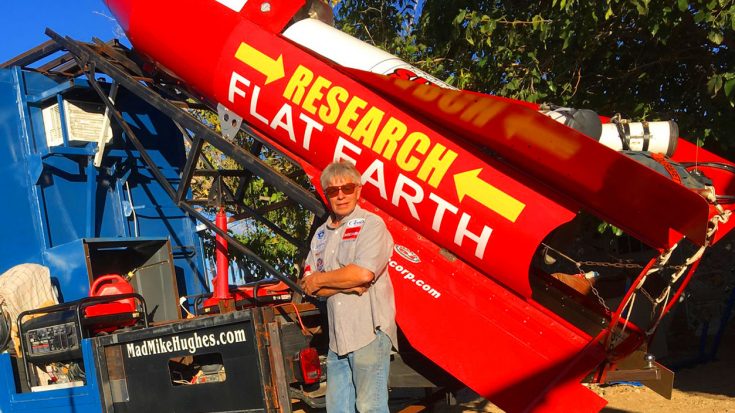 Throughout history, there have been many champions of aerospace engineering who redefined flight such as the Wright Brothers, Kelly Johnson, and Jiro Horishoshi. All around the world we have seen evidence of these great aerial innovations bringing us closer together. But there are some who can’t grasp the concept of “around the world” so they going to extensive lengths to prove the Earth is flat.

You may have heard of Flat-Earthers, people who reject the notion that planets are round simply because of their inability to see over the horizon. The Flat Earth Theory has caught on among a highly educated crowd with such proud members as Dr. Shaquille O’Neil. Members of this elite association have a tendency to deny evidence such as hundreds of years of maps and navigation records, everything that NASA done or just looking at pictures of planets. But there are a dedicated few who use the power of science to prove that the world is flat, Mike Hughes is one such man.

Mad Mike Hughes is no stranger to building rockets, but it comes as a surprise that he is a believer in the Flat Earth Theory. By day Hughes is a limo driver, but by the rest of the day, he is a self-proclaimed stuntman using rockets made of scrap metal to jump vast distances. The last time Mad Mike did a rocket launch he ended up in the hospital for three days after using a faulty parachute.

The Flat Earth Society has given Mad Mike their blessing with his latest rocket launch into space which will surely prove that the earth is flat once in for all. He found plenty of support for his Kickstarter raising $310 of their $150,000 goal. He has some harsh words for the scientific community for manipulating the world for so long.

Men like Mad Mike will surely show us that institutions like NASA, SpaceX and the rest of aviation are simply a colossal lie. Thousands of years of deception will surely be put to rest as he launches himself in his flat earth rocket this Saturday.