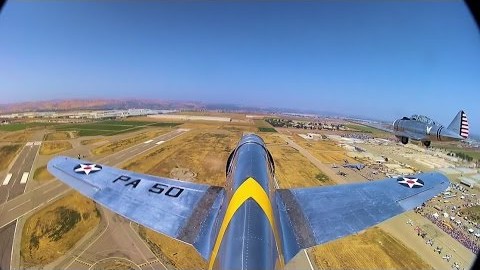 The Ultimate Homage To Fallen Pilots

In 2015, the Planes of Fame Museum of Chino California held a very special event displaying the rarest and most iconic warbirds of World War II. In addition, they were paying their respects to all the pilots who never flew back home with the Missing Man Formation. This formation was first seen in the movie Hell Divers in 1932 and it was then adopted by the Untied States in 1938. These flypasts are typically done at  funeral or memorial events.

There are many variations of this formation, but in all of them one of the aircraft pulls up or splits off, representing the missing man that’s going into the heavens.

This awesome display you’ll see in the video also has a very special treat as well. As it was a meticulously planned event, all the planes were equipped with cameras. That footage was then expertly edited using the different vantage points for your viewing pleasure. As for the warbirds in the video, you’ll see the P-38 Lightning, P-36 Hawk, North American Harvards and a P-47 Thunderbolt. This doesn’t leave much else to be desired.