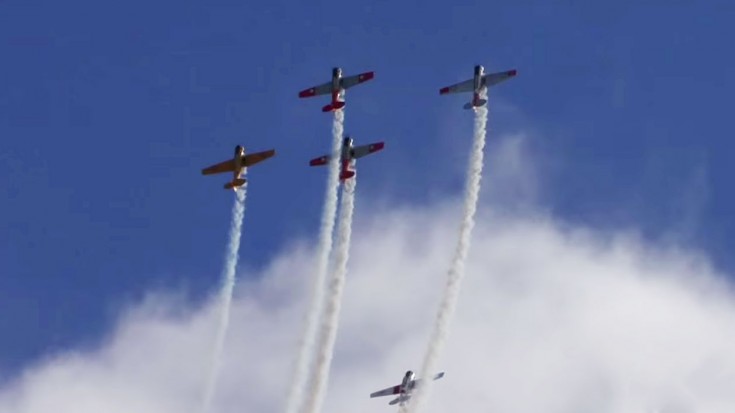 Very Noisy Radials, But That’s Never Bad During An Airshow!

The Historical Aviation Film Unit has provided some great aerial footage again, this time of T-6 Texans performing spectacular formations. The T-6s were designed by North American Aviation and were single-engined aircraft used primarily as trainers during World War II and beyond. Because of their aesthetic design, Texans are often used to simulate the Japanese Mitsubishi Zeros in air shows and as Zero props in movies. With over 15,000 of them produced, they are popular during airshows, as many models remain from that era.

Here’s their performance at a glance:

Since there was a big surplus of these planes as they were not used in action during World War II, the T-6 Texans became stars in movies. They appeared in A Yank in the R.A.F, Tora! Tora! Tora! and A Bridge too Far to name a few. From a war standpoint, they were first deployed in 1948 during the Arab-Israeli War to provide ground support.