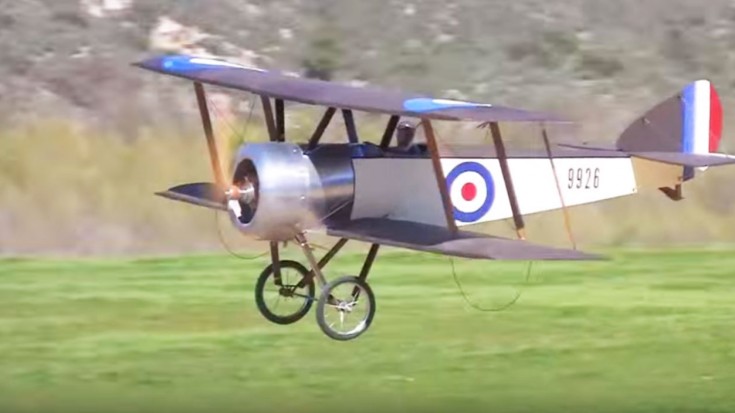 That’s Unfortunate, But Kind Of Funny Too.

Although this obviously isn’t a World War II plane, it’s still pretty close and pretty impressive. Believe it or not, this plane, the Sopwith Pup, was built just twenty short years before World War II. Produced from 1916 to 1918, this single seat biplane fighter was built for the Royal Air Force. It was used briefly in air to air combat, but as Germany came out with new and better technology, they were demoted to trainer aircraft.

Now, whoever built this awesome Rc aircraft put a lot of time and money into it. It’s really big and the only thing that we found out about it is the fact that it’s been around since about 2010. As you can tell, the pilot clearly knows what he’s doing but unfortunately, accidents happen.

While pulling her up, he either had a stressed airframe or simply pulled too hard and one of her wings just ripped off. Not that we’re not for safety, but their reaction was pretty hilarious in retrospect. At a pretty high altitude for such a big plane, her downward sprial could have brought her down practically anywhere. That’s why you should yell, “heads up” to get everyones attention.

These guys screamed it out (yes, we counted it) 14 times. It’s pretty funny when they yell over each other, that’s all we’re saying. As for the plane, it is indeed a shame. At the end, one of the guys turns to the pilot and says, “she’s had a good run.”