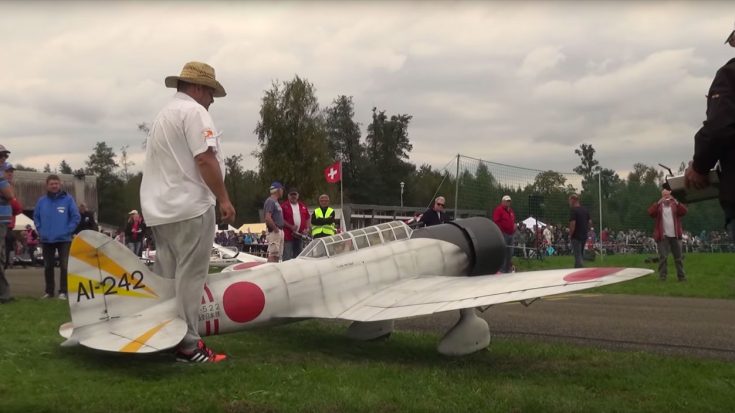 The Bigger They Are, The Harder They Fly.

The Hausen Flight-Day in Switzerland is a celebration for lovers of oversized remote control aircraft. There isn’t a regular sized RC plane in attendance here, only the big boys get to strut their stuff. One of the most impressive displays of RC aerobatics was a simulated dogfight between two Aichi D3A1s and a P-47 Thunderbolt.

The Aichi D3A was the primary dive bomber of the Japanese Navy during World War II. It earned its place in history as the first plane to attack American Forces during the raid on Pearl Harbor. Aichi D3As were responsible for destroying 14 American warships during WWII. Despite its success early in the war, American fighters managed to outpace them and only one D3A survives to this day.

On the other hand, the P-47 is much more widely known for its endeavors during WWII. The fighter-bomber served in many roles during against both Germany and Japan. Dogfights, escort missions, bombing raids, the P-47 did it all.

In a beautiful display of size and force, these three planes take each other on in a dive bombing dogfight in the Swiss hillside. This film from RCHeliJet captures plenty of action and shows what these huge RC planes can do.