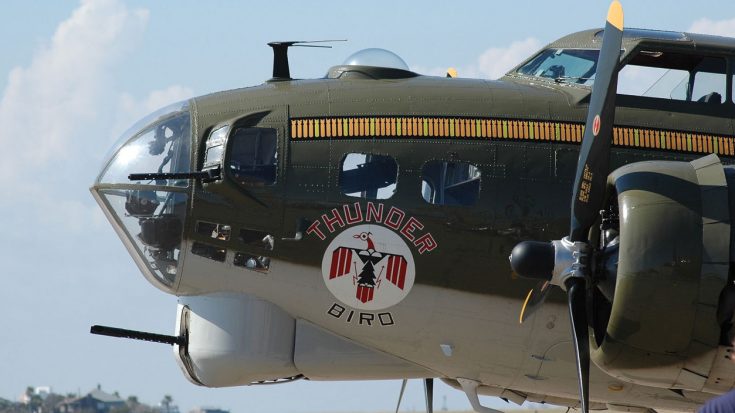 The More You Know.

Sometimes, things that go down in history as significant have the oddest beginnings. Our iconic B-17 is no exception.

The B-17 was not yet named when it first rolled out of Seatle’s Boeing plant back in 1935. Back then it was simply called Model 299. Shiny and new, Boeing had a press conference when unveiling their newest bomber with many reporters clicking away taking pictures and notes.

“Why, it’s a flying fortress!”-Richard Williams

Unlike previous bombers, B-17’s prototype sported an impressive armament. Fitted with numerous gun installations including one in the nose (see picture below), this plane could shoot in almost any direction to protect itself. That was something never before seen on a bomber.

It’s not surprising then that upon laying his eyes on this bomber for the first time, Seattle Time’s reporter Richard Williams exclaimed, “why, it’s a flying fortress!” and wrote about it in that way in his column. Boeing’s executives got wind of this statement and finding it extremely fitting, named it exactly that. They credited Williams with the name and swiftly trademarked it as well. It was really as simple as that.

This incident started a long lasting tradition for Boeing’s bombers. After the B-17 Flying Fortress came the B-29 Superfortress and the B-52 Stratofortress which are arguably the most famous bombers of all time.