The Ridiculous Reason The Nighthawk Is Designated ‘F-117’ 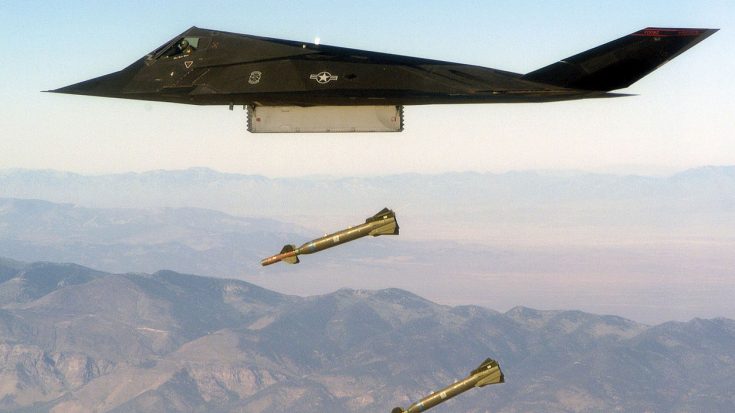 We’d Figure Pilots Are Smarter Than That.

A lot of secret projects came out of Lockheed’s Skunk Works. From the SR-71 Blackbird to the F-117 Nighthawk, some of the best and most advanced technologies are attributed to the incredibly bright men and women who work there. Having said that, it’s almost silly to think why they needed to designate their 80’s attack aircraft with the letter “F.”

Most if not all of you know this, but we’ll go over it really quickly just so this whole story makes sense for people who might have missed this distinction. The letter “B” in B-17, B-52 and B-2 for example stands for “bomber.” The letter “F” in F-15s, F-22s and so on stands for “fighter.” Pretty simple right?

So now if you look at the F-117 Nighthawk, that doesn’t really make sense. Skunk Works built this platform as an attack aircraft. This mission type’s primary role is “carrying out airstrikes with greater precision than bombers, and (be) prepared to encounter strong low-level air defenses while pressing the attack.”

It has no gun. It can’t carry missiles. The F-117 can only carry GBU type bombs in its weapons bay and on its hardpoints. In conclusion, the Nighthawk is 100% bomber.

So why the fighter designation?

Here’s the big reveal that we’ve been leading up to. We watched a whole documentary on the design and service of this plane and one of its designers spilled the beans about the unconventional designation.

Long story short, the brass wanted their top pilots to fly the Nighthawks. With millions of dollars invested, they didn’t want to lose one in inexperienced hands (no offense bomber pilots.) They wanted their best fighter pilots to fly them, but there was no way a fighter jock would fly a bomber so…..they changed the name from B-117 to F-117.

The fighter pilots started lining up.

Don’t take our word for it though. We’ve cued up the exact part of the documentary so you can hear it for yourself. It’s really quite silly that such a sophisticated company had to take such simple measures to entice pilots to fly their new plane, but hey, the more you know.

It’s a really cool factoid you now have in your arsenal of knowledge.