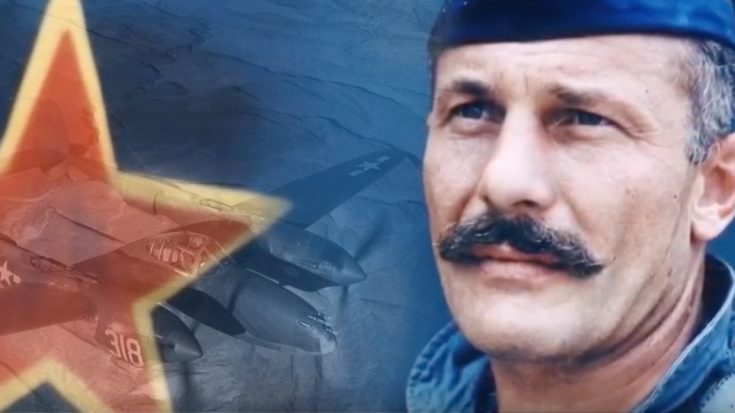 If there’s one thing in life that you can be sure of, it’s that Robin Olds is the man.

Not only would he become an excellent fighter pilot and gain ace status in WWII, but he worked tirelessly to put forth new ideas on training and tactics that would have a lasting impact on the Air Force.

An incredible leader, Robin Olds became an absolute legend – even his mustache is up there as one of the most revered of all time.

Here are 8 ways the guy that would start all of his speeches by shouting “I am a warrior!” showed us he was a total badass:

8. He Was The Kind Of WWII Ace That Would Attack 50 German Planes At Once

When he entered WWII as a P-38 Lightning and P-51 Mustang pilot, Olds already had more than 650 hours of flying time to his name. He quickly became an ace, shooting down 12 German planes and scoring another 11 1/2 on the ground. Olds is credited with 107 missions.

On one of his early missions, Olds and his wingman attacked 40-50 Messerschmitt Bf 109s. There was just one problem – he forgot to switch to his eternal fuel tanks in his Lightning. Blowing out his window and nearly crashing, Olds managed to come away from the fight with two kills.

7. He Lost His Teeth Becoming A Football God

Before, WWII, Olds enrolled in the United States Military Academy at West Point where he naturally did what any badass would do – became an All-American Defensive Tackle. He was the highlight of the 1940 Army-Navy game when his teeth were knocked out in a tackle. His face a fine bloody mess, he refused to step off the field. Olds was inducted into the College Football Hall of Fame in 1985.

6. Authorities Stopped Him From Serving In Korea

The restless warrior stayed home in the Korean War, but not because he wanted to. He put in numerous requests to be transferred to combat duty, but was denied each time. Never content with inaction, Olds performed as a stunt pilot on the air demonstration team and then commanded the RAF No. 1 Squadron.

5. His Demonstration Team Shenanigans Nearly Got Him Court-Martialed

Always at odds with authority, Olds formed an aerial demonstration team as commander of the 81st in the 1960s. He got in all kinds of trouble for the unauthorized low-level aerobatic display of the F-101 Voodoo fighter-bombers at an Air Force open house. Nearly court-martialed, he was stripped of command, lost an award, and transferred. But the move was a contributing factor in allowing him to go to Vietnam.

4. Olds Made His Men Train Him In Vietnam

Finally, Olds took the position that would truly solidify his legacy – in 1966, he was made commander of the 8th Tactical Fighter Wing based in Thailand. There, his leadership flourished. He assigned men by their strengths rather than rank and was always trying to find solutions. Best of all, he made his men train him. He flew as a new guy until he mastered the F-4 and when he did, he always led from the front.

3. He Disguised F-4 Phantoms To Take Out The Enemy

Operation Bolo proved Old’s pure genius. He disguised F-4 Phantoms as F-105 bombers to lure enemy MiG-21s out for a fight. The tactic was overwhelmingly successful. In just that single operation, 7 MiG-21s were destroyed. That was nearly half of the MiGs the Vietnamese possessed.

The operation was a chance for him to prove that his calls for intensive air-to-air combat training, tactic development, precision bombing, and close air support should be heeded. He finally had his own stomping ground.

2. His Iconic Mustache Has Its Own Month

Mustache March is no joke. Every March, men in the Air Force grow mustaches to honor Old’s most good-natured rebellious act against authority – his luxuriously waxed non-regulation handlebar mustache.

1. He Always Led From The Front

Olds was taken by congestive heart failure on June 14, 2007. The Missing Man flypast at his ceremony was a little different – instead of the lead’s wingman pulling up, the lead himself sped off into the sky, an appropriate tribute for the man who always led from the front.