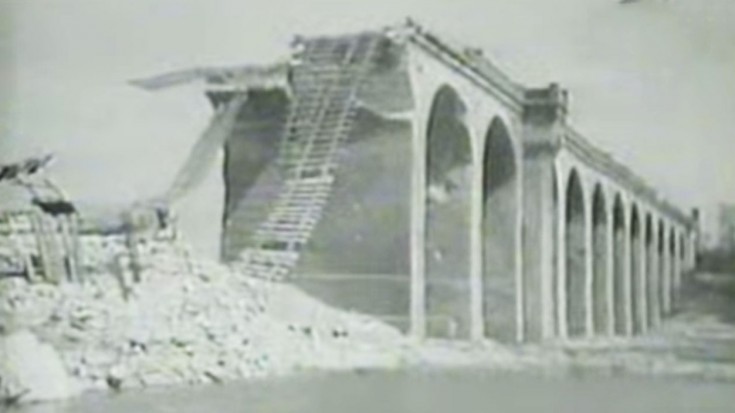 A Bigger Version Of The Tallboy And Twice The Devastation

The Grand Slam was a 22,000 lb. bomb designed by Barnes Wallis, the same man who developed the smaller Tallboy bomb. An ‘earthquake bomb,’ its designed purpose was to hit the ground and go as far down without exploding, only to detonate underground, creating an earthquake effect. This in turn is what made these bombs so effective. While the initial impact did create a massive crater and destroyed targets, it was the earthquake effect that damaged additional structures nearby, rendering them useless.

This 22,000 lb. bomb did not reach us before the spring of 1945, when we used it with great effect against viaducts or railways leading to the Ruhr and also against several U-boat shelters.-— Sir Arthur Travers Harris

The development of the Grand Slam began mid 1943, when it was well documented that the previous Tallboys were extremely effective. The prototypes were tested in March 1945 and towards the end of World War II, were widely used by the Royal Air Force. Used to bomb strategic targets such as bridges, railroads and bunkers, the only planes that could carry them were the British Avro Lancasters. As with the Tallboys, the bomb bays had to be extensively modified to fit the loads. Designated B-1 Specials, these were the only bombers capable of taking off with them an releasing them on the enemy.