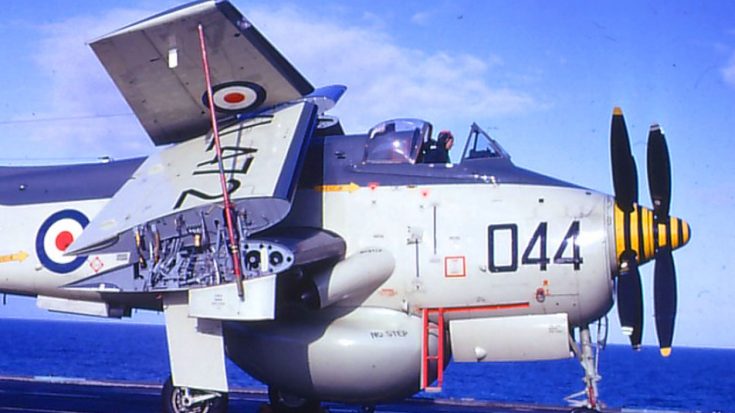 World War II saw a drastic shift in maritime battles transitioning from large battleships to aircraft and submarine-based warfare. Knowing the Soviets could potentially deliver attacks via submarine, the Fairey Gannet was designed to deter a looming naval threat.

Debuting in 1954 the Fairey Gannet was a worthy successor to the Douglas Skyraider with an arsenal of over 2,000 lbs of torpedoes, mines and other anti-submarine weapons. Roughly 300 Gannets were built to serve the Naval Fleets of Britain, Germany, Australia and Indonesia. It had a very big wingspan of 54 feet, it was designed with innovative double-folding wings to allow it to be stored on aircraft carriers. The other feature that set this apart from others was the use of a double turboprop engine, which was able to engage both propellors for combat speed or shut one off for cruising to conserve fuel.

“The German and Australian Navies were highly impressed by the new aircraft and both ordered Gannets in 1956. The Australians even settled for AS.1s, with the intention of exchanging them or converting them to AS.4s when they became available – though this never actually came to pass as the Australians soldiered on with the AS.1s until 1967 when they replaced them with Grumman Trackers.”

Currently, there is only one Fairey Gannet capable of flight and lucky for you, it is launching into action in this clip.