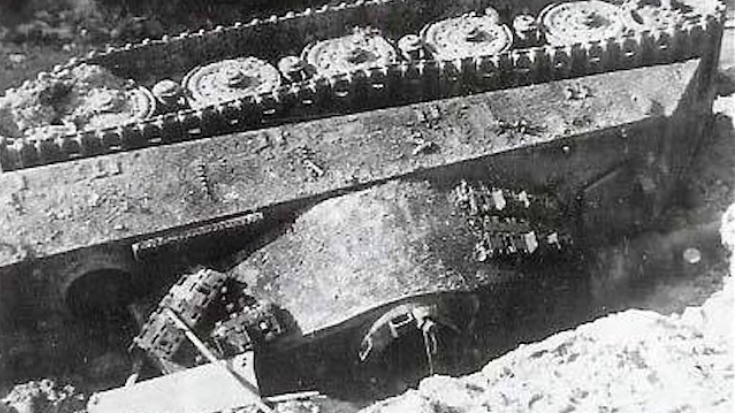 Following the Allied victory over the Axis Powers, Europe was littered with discarded tanks from the vicious fighting. Most of these tanks were removed or scrapped for their metals in years after WWII had concluded. However, there is a lone German King Tiger tank that lingers long after its demise and why it was buried.

To this day, King Tiger No. 124 remains partially buried under a road in France. There are several accounts of how this massive weapon of war ended up in this odd situation. One story claims the tank was heading into battle when a bomb detonated and it fell into the crater. Another version says it became disabled and buried to prevent its capture from the Allied Forces.

In the years sinceKing Tiger No. 124’s demise, there have been man attempts to extract it from the ditch but all have ultimately failed. Scavengers have take parts and even detonated the turret to scrap for parts. For over 70 years, there has been a debate over rightful ownership of the tank and possible restoration. However, the situation has finally found a resolution as it finds a home in a Normandy war museum.

“A great piece of history has been damaged and I only hope it can be restored – but we are delighted that this long-awaited recovery project can now take place and we cannot wait to see another original Tiger II on display in Normandy.”

Crews are planning to unearth the tank’s remains and restore what is left. Mark Felton Productions provides a comprehensive history of King Tiger No. 124 in this short video.