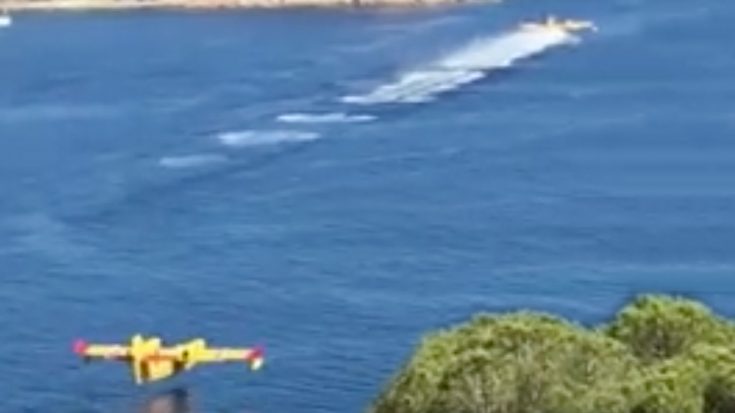 It seems the United States, especially California, is not the only place suffering from wildfires. During dry months in particular, if a little fire starts somewhere in the middle of nowhere it can quickly escalate to a fire of epic proportions. Such was the case last year in France.

We covered this story last year, but videos of the fires and rescue efforts are still popping up on social media. A man by the name of Franck actually uploaded a really neat video of two water scoopers filling up to aid in the firefighting efforts and so far it almost got 1 million views.

What you’ll be looking at here are two Canadair CL-215s. Conveniently nicknamed “Scoopers,” these aircraft were built between 1969-1990 specifically for firefighting duties. They’re designed to have extremely low stall speeds (76 mph) and be able to take strong winds/drafts associated with fires.

Built in Canada, 125 of these aircraft were produced and distributed around the world. It’s current operators are Canada, Greece, Italy, Spain, Thailand, Turkey, United States and for some time they were also used by Croatia, France, Venezuela and Yugoslavia.

To top things off, we’ll like to extend our gratitude to all the pilots who fly these aircraft. They’re doing incredibly important work that is extremely difficult and dangerous. Hats off to all of you out there.