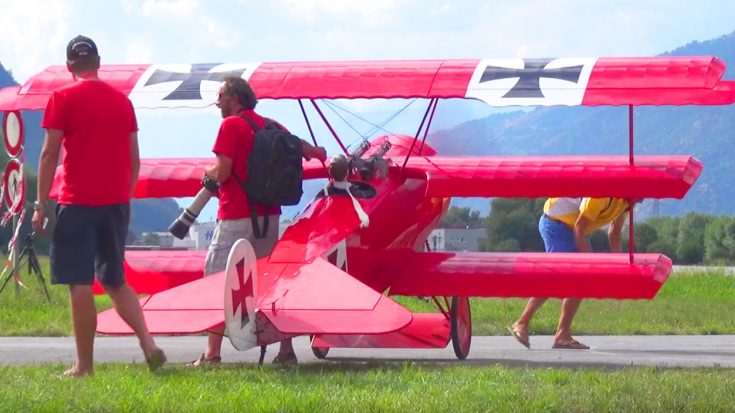 The majority of imagery from WWI were recorded in black and white. But there is one color that stands out and makes you think of the WWI skies, red. The Fokker Dr.I, pride and joy of the Ace of Aces himself, the Red Baron.

With 80 aerial victories to his name during the first World War, the Red Baron gave justification to the Fokker Scourge. In a time when military aviation was relatively new, few planes could keep pace with the agility of the Fokker Dr.I.

“Anthony Fokker designed and built the Dr.I Dreidecker, and delivered the first triplanes to Manfred von Richthofen’s Jagdgeschwader I in late August 1917. After a brief familiarization flight, the ‘Red Baron’ took aircraft number 102/17 up on September 1, and promptly shot down a British R.E.8 of No. 6 Sqn, whose crew probably thought the three-winged craft was a friendly Sopwith.”

The notorious crimson triplane has been given the treatment as an RC plane in this video. As you can see it definitely does not skip out on the speed and agility. Even the Red Baron would be proud of this spectacular show.