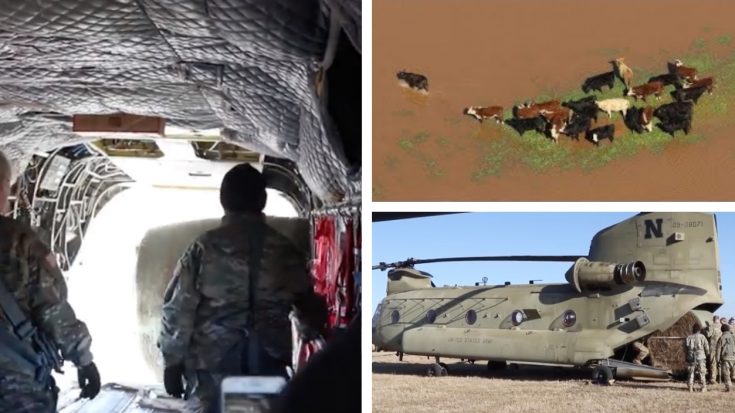 The Fremont area on the Platte River. Each small island covered in dozens of cattle. #NebraskaFlood #Nebraska #Cattle pic.twitter.com/Blhc1jI4Be

It’s no secret that our military aircraft can do quite a lot of damage, but at the end of the day, they are there to protect. Sometimes that is done through aggression, but sometimes, like in Operation Chowhound and Operation Manna during WWII, it’s as simple as dropping food to those in need.

Due to recent severe weather, the midwestern United States has experienced catastrophic flooding. Personal property, infrastructure, and agriculture were hit hard. But farmers and cattle ranchers were worried about more than just themselves – countless herds of cattle have been stranded by the floods. Even worse, it’s calving season.

So proud of these Nebraska Army National Guard who airdropped bales of hay from a CH-47 Chinook for stranded cattle after the widespread flooding. Watch here: https://t.co/t7B4ZWK9HK#NebraskaStrong #NebraskaFlood2019 #Nebraska pic.twitter.com/6g1ZvqFF5E

Thanks to the Nebraska Army National Guard, Nebraska farmers in Richland, Nebraska, can sleep a little better at night. Using their CH-47 Chinook helicopter, Company B, 2-135th General Support Aviation Battalion was able to secure 10 bales of hay to drop to the hungry cows below. The last time this happened in Nebraska was 1949!

While the losses have been terrible, it’s heartwarming to see the farmers and cattle get some of the aid they need. Check out the action in the video below.