And There You Have It. The Best Spitfire and Mustang Flyby Ever Recorded 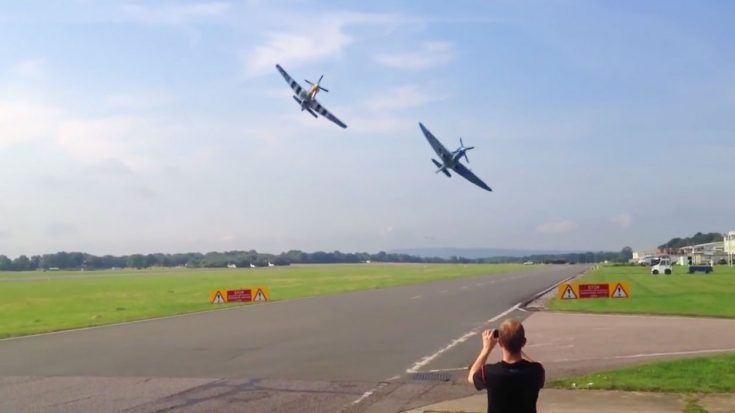 Although this video is over four years old, it had to make it on World War Wings. As warbird fanatics, we love flybys (real ones) but as we run a website the next best thing is an awesome video. What you’ll see below here is a low and fast flyby of a P-51 Mustang and Supermarine Spitfire which includes a barrel roll at the end.

Nicknamed “The Cadillac of the Sky,” the P-51 has a special place in any warbird fan’s heart. It’s sleek lines and scoop on their underbellies make them very distinct and they’re always a pleasure to see at airports.

Introduced in 1942, Mustangs were developed as long-range bomber escorts and fighter aircraft. Over 15,000 of them were produced until the end of the war, some serving up until 1984 in the Dominican Air Force.

We dare say that the United Kingdom’s counterpart to the P-51 Mustang would be the Supermarine Spitfire (although one could make a strong case for the Hurricane.) They also had very distinctive features like its elliptical wings and powerful Merlin engines.

Spitfires were also produced in large quantities, with over 20,000 built from 1936 to 1948. As of this writing, almost 60 of them are still airworthy.