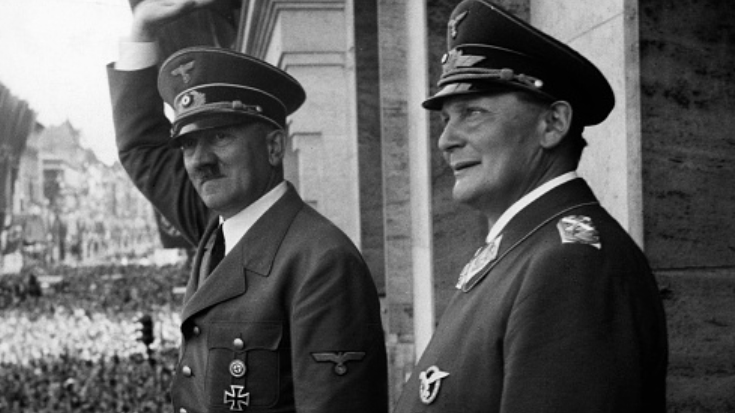 Adolf Hitler has gone down in history as one of the most infamous figures of all time. However, Hitler can’t take all the credit for this reign of terror, he had help from others. One of the key figures behind the Third Reich was Hitler’s right-hand man Hermann Goering, but he had a few dark secrets of his own.

Hermann Goering rose to prominence as a fighter ace in World War I, earning 22 aerial victories. He joined the National Socialist Party and allied himself with Hitler after hearing one of his speeches in 1922. However, it was at the Munich Beer Hall Putsch that would have long-lasting effects on Goering for the rest of his life.

During the Munich Beer Hall Putsch Adolf Hitler rallied crowds to rise up against the current German Government. Huge crowds took to the streets to march against the War Ministry, but they pushed back. Soldiers opened fire against the crowds, killing one of Hitler’s bodyguard, wounding Hermann Goering with a bullet to the leg and buttocks. Hitler was arrested for the uprising and Goering was taking to the hospital and treated with morphine. This began an addiction that would endure until his final days.

When Hitler rose to power, Goering rose with him serving as his right-hand man. Goering oversaw the Luftwaffe, served as an architect of the Holocaust and established the Gestapo. However, Herman Goering’s use of morphine is often attributed to mood swings, anxiety, and excessive weight gain. The morphine provided him with a sense of euphoria which could be seen in his excessive wealth, extravagance around his palace decorated with stolen artwork. He required five shots of morphine per day to remain in functional form.

As WWII came to a close in Germany, Goering learned of Hitler’s intended suicide. He reached out to the Fuhrer and asked permission to be the inheritor of the Third Reich. Hitler took this as an act of treason and ordered Goering to be stripped of all of his titled and cast out. Despite no longer being a military official Goering was put on trial for war crimes at Nuremberg.

“It is ironic that Hermann, an anti-Semite, was addicted to a substance that was possibly unfairly referred to as the Jewish drug. As an aside when Goering was captured by the Americans in May 1945, he was weaned off morphine before his trial. For the first time in many years, Hermann was again lucid and focused. His intellect was again able to take precedence.”

While on trial, Goering was even able to outwit layers pressing him for information. His vanity was present on trial, insisting that he was the leader of the Reich now, as Rudolph Hess shook his head in disbelief. He was sentenced to be hanged, but requested a death before firing squad to die as a soldier but was denied. The day before his execution Hermann Goering was found dead in his cell after ingested a cyanide pill. A final end to Hitler’s right-hand man.